Fractl has produced thousands of content marketing campaigns across every topic, and for the past seven years, we’ve been keeping track of each and every campaign in order to refine and improve the content we produce on behalf of our clients.

In my last post for Moz, I explained how to set realistic digital PR expectations for your content based on your niche. In this topic, I want to dive a little bit deeper into the data and share insights about how the source of your content can be just as important in determining how your content will perform.

In this analysis, I looked at 1,474 client content campaigns across six different data source categories:

It’s important to note that there are countless other data sources that we use for content campaigns every day at Fractl that are not mentioned in this article. In this analysis, each category has at least 20 campaigns, while some categories have several hundred campaigns.

It’s also important to note that averages were collected by excluding upper outliers. For campaigns that went “viral” and performed well above the norm, we excluded them in the calculation so as not to skew the averages higher.

In addition to sharing link and press averages, I will also be walking through how to produce pressworthy, sharable content from each data source and providing examples.

Across the entire sample of 1,474 campaigns, a project on average received 24 dofollow links and 89 press mentions in total.

A press mention is defined as any time the content campaign was mentioned on a publisher’s website. 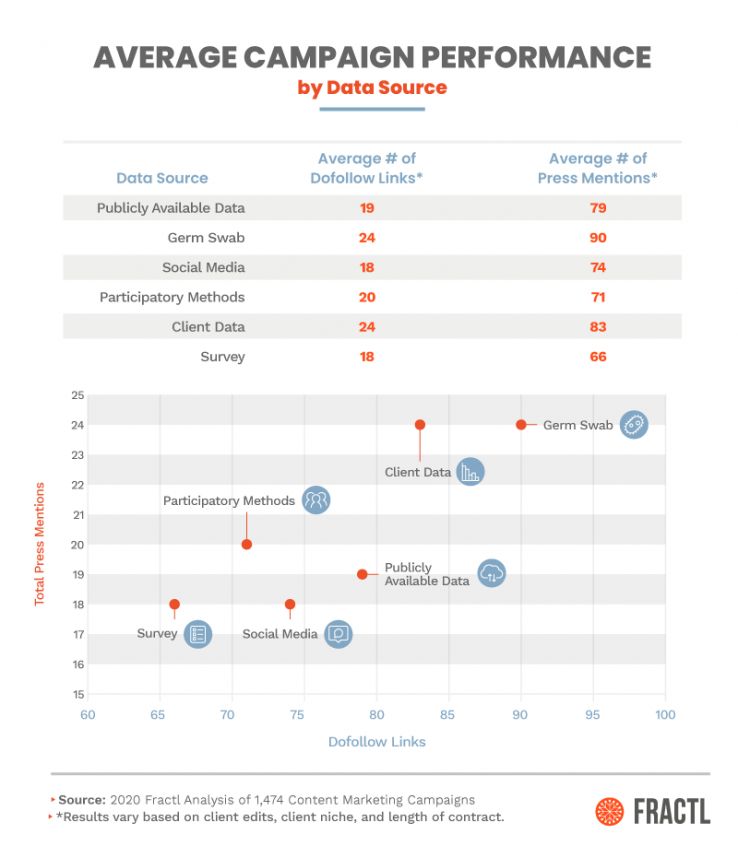 While free data sets can be a treasure trove of information for your content, keep in mind that they’re not always the simplest to work with. They do require a lot of analysis to make sense of the massive amount of information in them, and to make the insights digestible for your audience.

Take for example a campaign we produced for a client called Neighborhood Names. The data was free from the US Census, but in order to make any sense of it, our researchers had to use QGIS, Python, text-mining, and phrasemachine (a text analysis API) just to narrow it down to what we were looking for.

And what were we looking for? Looking at neighborhood names across America seems boring at first, until you realize that certain words correspond to wealth.

I was the outreach specialist for this project, and by using the wealth angle, I was able to secure two notable placements on CNBC as well as a press mention on MSN. The project quickly made its way around the internet after that, earning 76 dofollow links and 202 total press mentions by the end of our reporting period.

Unlike scouring the internet for free data, using a survey as a methodology can be more costly. That being said, there is one major advantage to using a survey to shape your content: you can find out anything you want.

While publicly available data will tell a story, it’s not always the story you want to tell, and that’s where surveys come in.

Of course, when it comes to surveys, anyone can create one without paying attention to research method best practices. That’s one of the problems we need to address. With “fake news” in the forefront of everyone’s minds in 2020, building trust with journalists and editors is of the utmost importance.

As content creators, we have a responsibility to ensure that content is not only attention-grabbing and entertaining, but also accurate and informative.

Survey campaigns, in particular, require you to analyze responses through a rigorous methodological lens. When collecting data for surveys, be sure to pay close attention to ethical upholdance, data validity, and fair visual representations.

From my own personal experience, germ swab content campaigns are the most fun, and often, the most disturbing. Fractl did some research a while back about the emotions that make content go viral, and oftentimes, germ swab campaigns hit all of the right emotions in the viral equation.

Negative emotions like disgust are often evoked when reviewing the results of germ swab campaigns. Our study found that when negative emotions are paired with emotions like anticipation or surprise, they can still achieve viral success (internet viral, not germ viral). What is more surprising than finding out the airplane tray table is dirtier than a toilet seat? 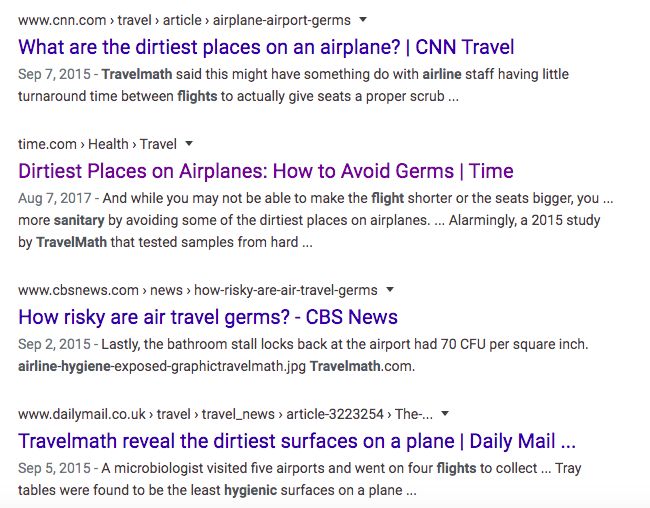 Publishers around the world seemed to think the content was surprising, too. This campaign performed above the norm for a typical content campaign earning 38 dofollows and 195 total press mentions — and this was before the COVID-19 pandemic.

Participatory methods are campaigns that require active participation for the methodology. These are unique ideas — no two are alike. Some examples of campaigns that fall under the participatory methods category are when we had team members do a 30-day squat challenge, asked respondents to draw brand logos from memory, or when we literally drove from D.C. to NYC with a dash cam to record traffic violations.

These campaigns have a certain level of risk associated with them. They require a lot of upfront effort and planning without the promise of any return — and that’s scary for clients and for our team who put in tremendous effort to pull them off.

As you can see from the chart above, however, these ideas collectively performed right on par with other campaign types, and even better than survey methodologies for both the number of dofollow links and press mentions. In order to reap big benefits, it seems you need to be willing to take a big risk.

Social media as a data source is almost a no-brainer, right up there with survey methodologies and publicly available data sets. Unlike participatory methods campaigns, you don’t have to leave your computer in order to produce a campaign based on social media data.

The best thing about using social media as a source for content is that it can be applied to all verticals.

The biggest lesson we’ve learned from producing content based on social media data is that the methodology is typically subjective, so you need to keep the project lighthearted in nature in order to earn major coverage.

For example, we produced a campaign for a client in which we looked at Instagram posts with the hashtag #sexy and a geolocation. From this, we were able to glean the “sexiest” countries in the world as well as U.S. states. 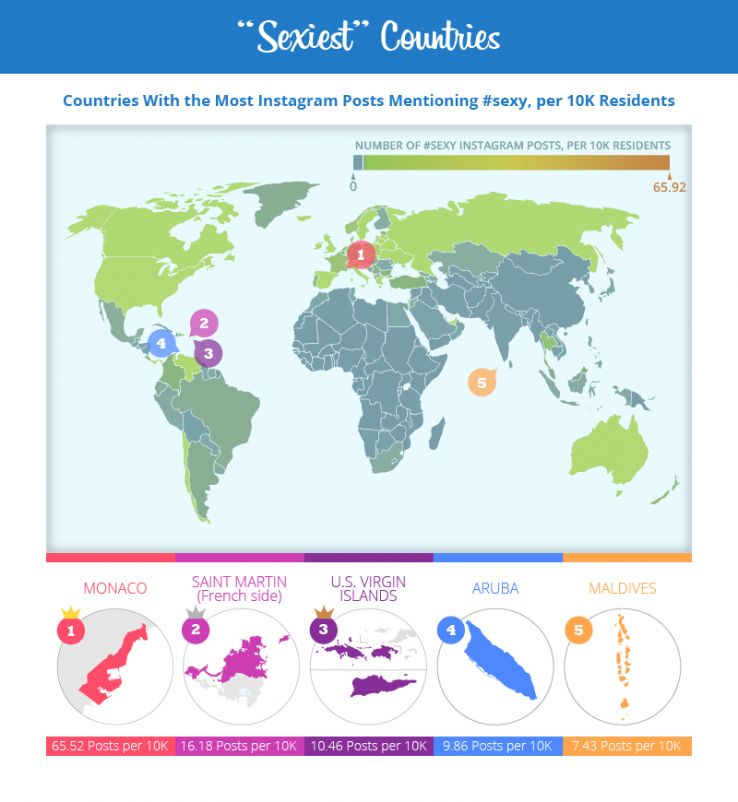 While it would be impossible to learn what the actual sexiest places in the world were, (what does that even mean?) we were able to produce a fun campaign that used geo-bait to appeal to lighthearted publishers, like Glamour, E! Online, Women’s Health, and Elite Daily.

Make sure that no matter the topic, whatever you produce contributes to an ongoing conversation. Statistics that don’t point to anything meaningful won’t be relevant for writers actually trying to add to the conversation.

Client data is often the most underappreciated data source for content marketers. You may be sitting on a wealth of actionable industry insights and not even know it.

You might think of internal data as only being useful for improving your internal processes at work, but it can also be valuable outside of your organization.

Unlike publicly available data, internal data is never-before-seen and 100% unique. Journalists eat this up because it means that you’re providing completely exclusive resources.

Think of this article, for example. This article is filled with data and insights that Fractl has gleaned after producing thousands of content marketing campaigns.

An added bonus of using internal data to craft your content is that, according to our analysis, it performs on par with surveys. Unlike surveys, though, it’s completely free.

No matter what methodology you’re using or vertical you’re creating content for, it’s important to realize that as content creators, we have an ethical and moral responsibility to create with an audience in mind.

With “fake news” on the forefront of everyone’s minds, building and maintaining trust with writers and editors is of the utmost importance.

All of the content you produce and promote must be assessed through a rigorous methodological lens to ensure that content is accurate and informative as well as eye-grabbing and entertaining.

Regardless of your methodology, if you don’t take the proper steps to make sure your data sources are accurate, you are contributing to the fake news epidemic.

Sign up for The Moz Top 10, a semimonthly mailer updating you on the top ten hottest pieces of SEO news, tips, and rad links uncovered by the Moz team. Think of it as your exclusive digest of stuff you don’t have time to hunt down but want to read!

Once your “smart” appliances can talk to you, who else are they talking to? Kashmir Hill and Surya Mattu wanted to find out — so they outfitted Hill’s apartment with 18 different internet-connected devices and [Read More…]

4 Reasons to Visualize Your Data Now